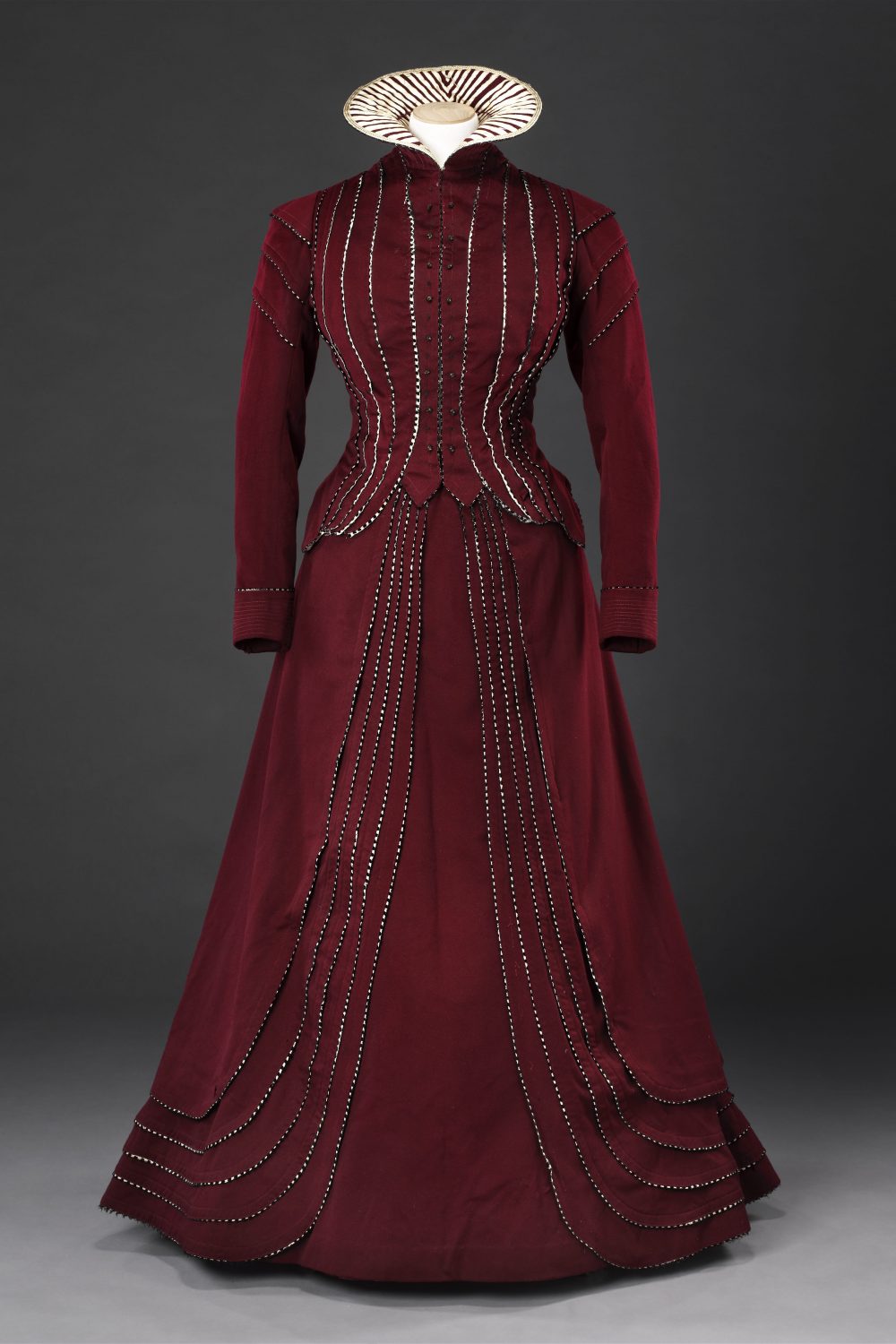 This two piece wool day dress shows a strong influence of the international art movement Art Nouveau in its design. Unlike the evening dress (see Related Item) that takes Art Nouveau characteristics of highly stylised natural forms to create visual impact, it employs the non-representational dynamism of sinuous lines that were also typical of the movement, and of the work of Scottish architect and designer Charles Rennie Macintosh and his Glasgow associates during the 1890s.

This dynamism is most evident on the front of the dress. The collar, composed of alternating bands of wool and cream silk forms a radiating frame to the face. A series of fine black and cream silk stripes on the bodice follow and accentuate the fashionable curves of the bust and waist created by the corset beneath; the skirt continues the rhythm of the stripes as they sweep down and around to the back on each side. The back of the dress is more subtle and graceful – an elongated V-shape leads the eye down the bodice to the narrow waist and the mirror image extended S shapes of its lower edge; a single pair of stripes down the centre back diverges to border the hem above a flounce separately cut from a full circle on each side.

Although wool was undoubtably also a sensible choice for the Scottish climate it was also typical of a current trend; Additional images show fashion plates from Harper’s Bazar magazine of similar wool dresses decorated in an Art Nouveau style. Like many such provincial establishments that increased in size and scope as they became more successful, James Mc Ewen and Co, where this dress was bought, started out as a draper’s shop in 1868. A surviving photograph, more or less contemporary with the dress, shows Mc Ewen’s front facade decorated to celebrate the accession of King Edward VIII and Queen Alexandra in 1901, describing itself as ‘Drapers’ and ‘Silk Mercers’ selling ‘Wedding Outfits, Mantles, Costumes, Furs and Millinery’. Its windows can be seen packed with all types of clothing. It became Perth’s most prestigious emporium that remained in its premises until 2016 when it was taken over, retaining elements of its earlier handsome facade.