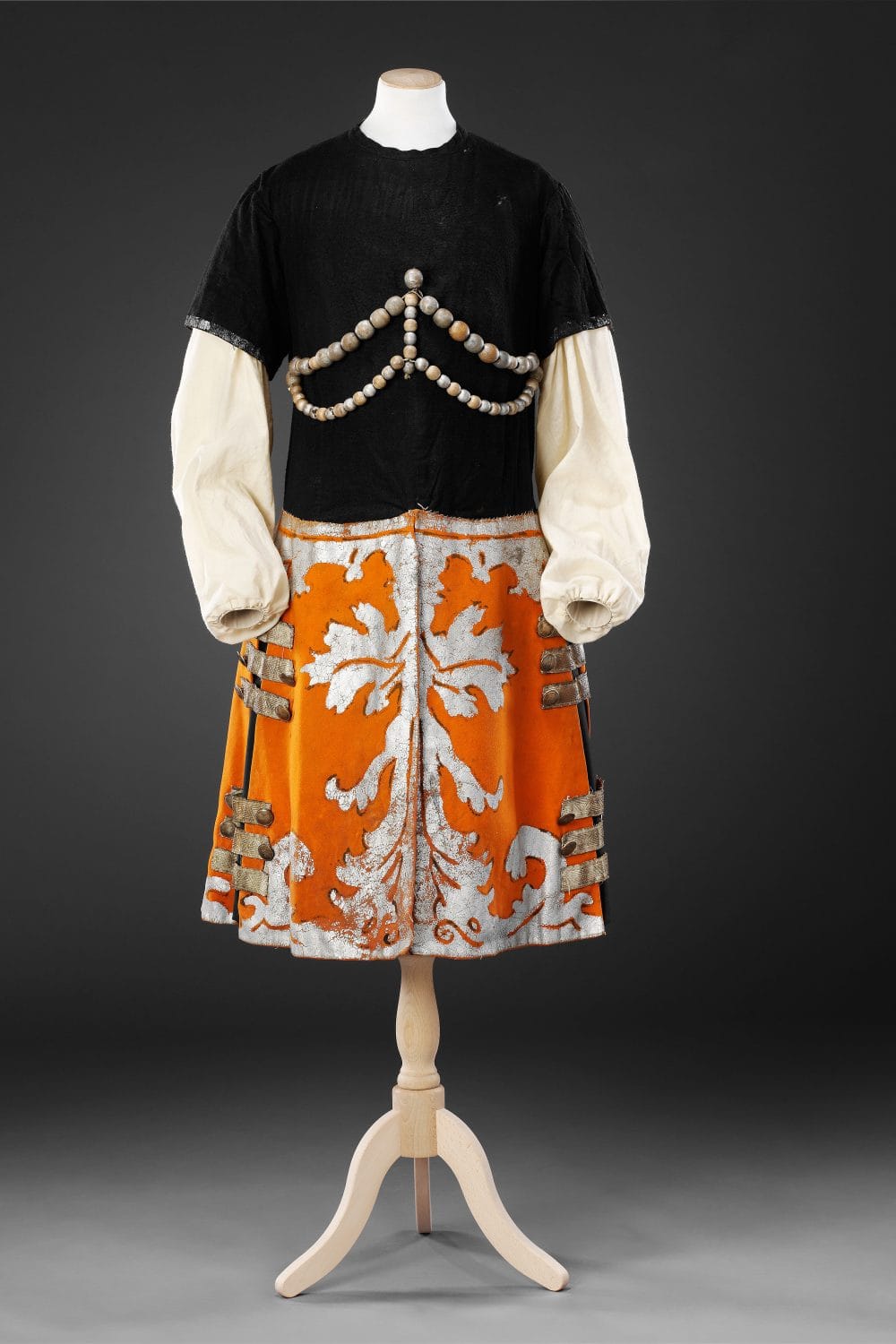 Serge Diaghilev’s production of the one act ballet Le Pavillon d’Armide was premiered in St. Petersburg in 1907 before becoming part of his famous first Paris season at the Théatre du Châtelet in 1909. The ballet was based upon a short story by Théophile Gaultier, in which a young French nobleman, staying overnight in a chateau belonging to a magician, dreams that the sorceress Armide and other characters in the Gobelins tapestry on the wall come to life. The Russian artist and designer Alexandre Benois was commissioned to design the costumes. Benois had lived in Versailles in the late 1890s, and his fascination with court life is evident in his designs, as is his study of 17th Century and 18th Century costume designs of the Paris Opera. Although executed in the broad painterly manner for which the Ballets Russes became known, his use of silver braid and paint in many of the costumes contributed a delicate, ghostly and dreamlike quality to the production. This tunic was worn by a guard (the term ‘figuration’ denotes a walk on part, adding to the spectacle). It came into the John Bright collection with one detached moth-eaten sleeve of fine cream wool and some strung and unstrung silver painted wooden beads. (See Additional Images). The tunic’s close similarity to that worn by a musician in the same ballet, now in the National Gallery of Australia, led to a decision to reproduce the fine wool sleeves from the original sleeve, and attach the beads following those on the musician’s costume.

The one piece garment has a bodice of black brushed cotton, its short sleeves bordered with silver paint; the ornate skirt of thick orange felt is cut in four panels joined at each side with shot horizontal bands of silver braid and large metal buttons, and is heavily painted with scrolling acanthus leaves in silver with black outlines. The cotton lining has, below the neckline, a label handwritten with the name of the ballet and the character, a faded German customs stamp, and ‘No.2’ written in purple. The tunic shows many signs of alteration and repair in its working life; the seven buttons of the back fastening are all different, one stamped ‘Paris’ and another ‘Monte Carlo’.