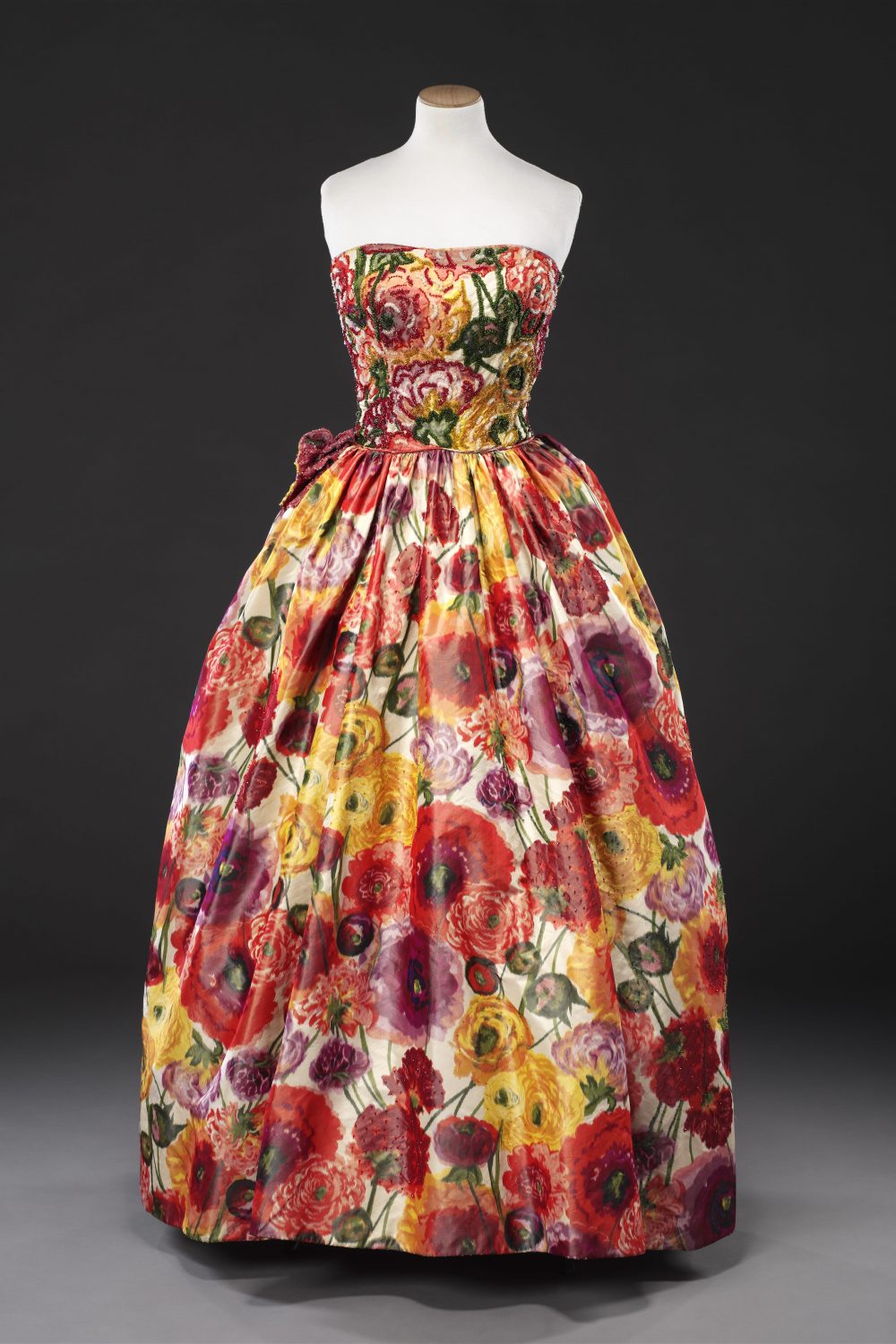 This ball gown came into the collection after it was used by Penny Rose in the 1996 film adaptation of the musical ‘Evita’. The film was based on the life of Eva Perón, an actress who married the Argentinian president Juan Perón in 1945, becoming a powerful and influential politician and reformer in her own right before her early death in 1952. She was renowned for her glamorous and stylish appearance and her love of designer clothes, particularly those of the most celebrated couturier of the day, Christian Dior.

In a scene from the film in which she prepares for her goodwill tour of Europe in 1947, Perón, played by Madonna held this dress up against herself, either to appraise the effect in a mirror or to get the opinion of those around her. Although the dress is of a later date, it served its purpose as an example of a glamorous, eye-catching gown, guaranteed to impress all who were to see it during her tour. The spectacular silk taffeta is warp printed with large colourful flowers that are seen to best advantage on the full length skirt held out with stiffened underskirts.

Large scale floral prints were ubiquitous around the turn of the 1950s into the 1960s, frequently used on cottons for summer dresses. At the top end of the market, prominent couturiers such as Balenciaga and Balmain were including ball gowns of silk warp printed with large flowers in their collections (see an example from the Kyoto Costume Institute https://artsandculture.google.com/asset/_/FAGZQBKSSc7OiQ); these top quality silks, also known as chiné silks, were frequently supplied by textile manufacturers centred around the Northern Italian city of Como, or based at Lyons or Saint-Etienne in France.

The dress has no maker’s label, but its materials and workmanship are on a par with those of a couture house in quality. The strapless bodice has been augmented with heavy beading in yellow, green, mauve and white, picking out areas of the floral design in their appropriate colours, in a manner that gilds the lily. Three flower motifs have been cut from the fabric and beaded to form a spray on the right side of the waistline. A more restrained approach was taken to the scattering of single beads across the skirt, looking as if they have rested where they fell.