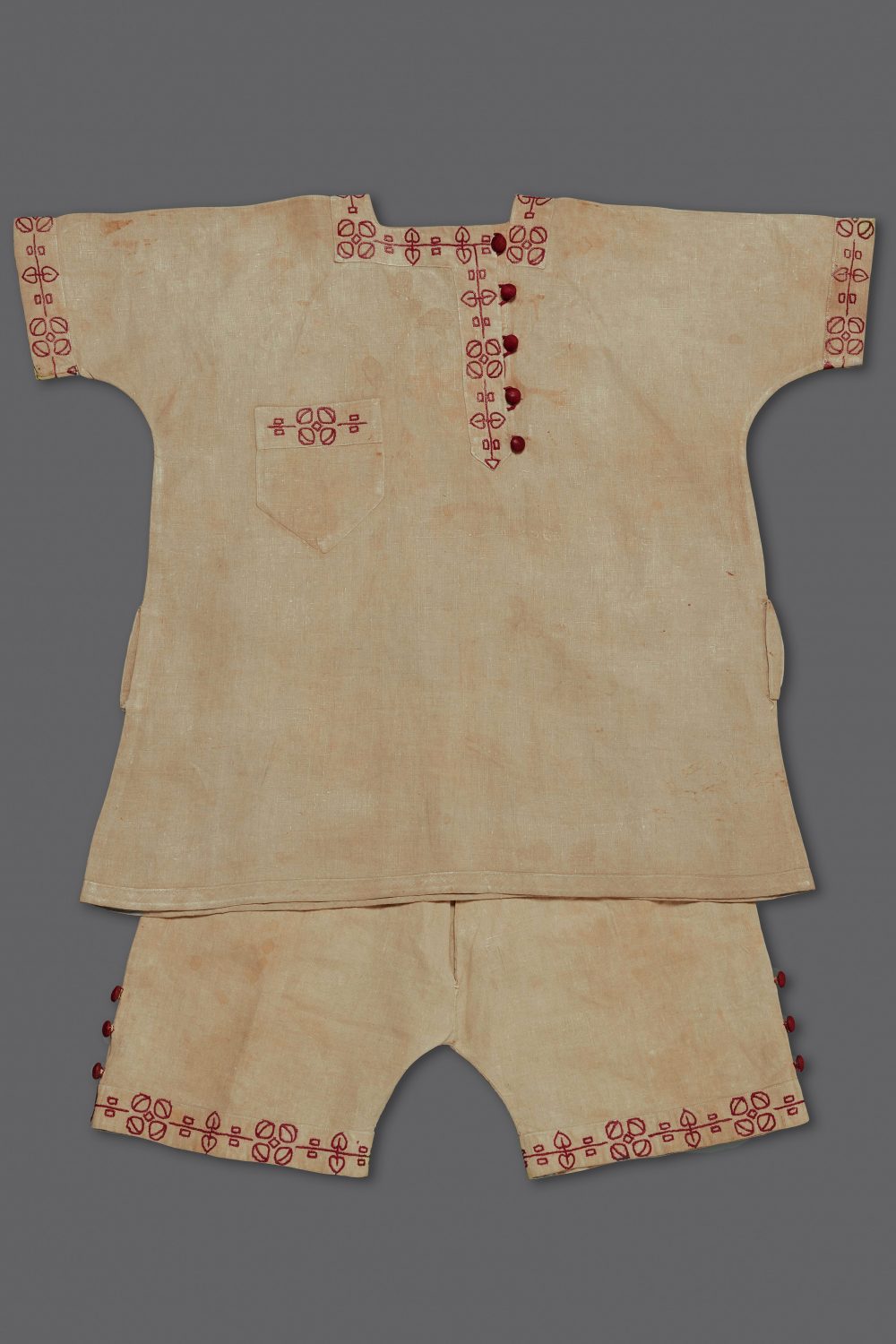 This small boy’s two piece suit of cool, comfortable, practical linen is simply cut for ease of movement with a loose, short sleeved tunic that is unrestricted at the neck and arms, and that was originally belted below the waist. The shorts have a fall front flap fastened with two soft linen buttons at the top, and a faced slit in the centre front seam; both are embroidered by hand with borders of small, highly stylised, symmetrically placed flowers and leaves, executed in one colour in one type of stitch.

The suit has been designed in a ‘picturesque’ style that self-consciously harked back to a rural idyll of the past in its simplicity, the natural linen evoking the smocks once worn by agricultural labourers. This type of middle class children’s clothing was associated with late 19th and early 20th Century artistic circles, such as the Arts and Crafts and Aesthetic Movements, and can be seen in the book illustrations of Kate Greenaway in the 1880s and 1890s. These movements often encompassed the needle arts, taking their motifs from the natural world but realising them in a highly stylised manner. Jessie Newbery, for example, head of embroidery at the Glasgow School of Art, a hub of avant-garde design, made loose dresses with simple embroidered borders – very much in the vein of this suit – for her daughters in the 1900s. (See examples from Anna Muthesius’ 1903 ‘Das Eigenkleid der Frau’ here: https://gsalibrarytreasures.wordpress.com/2014/03/24/jessie-newbery-and-artistic-dress/). Newbery has been described by author Jude Burkhauser as advocating ‘a democratisation of clothing where minimum surface embroidery of stylised organic motifs embellished simple inexpensive fabrics’.

Democratisation later manifested itself in publications such as The Needlewoman, a well produced magazine aimed at the home embroiderer. The November 1927 issue contained transfers for very simple sprig patterns and zig-zag borders in easy stitches, with instructions for their use on children’s dresses, women’s blouses and pyjamas (see Additional Images). ‘Very often’, it claims, ‘it is only the clever use of simple embroidery stitches that make the difference between an ordinary little dress and a Paris model’.