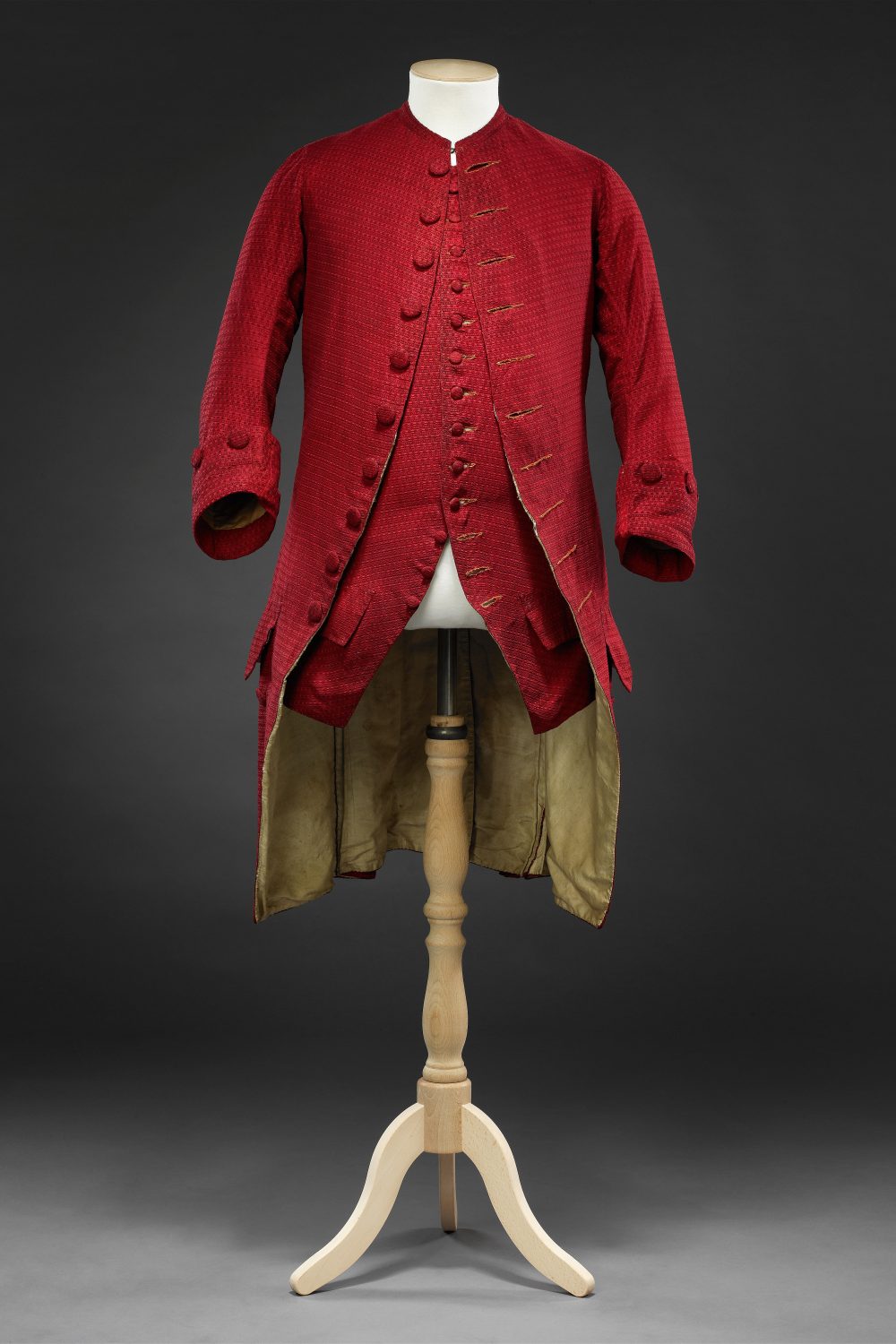 This coat and waistcoat would originally have been part of a suit with breeches of the same fabric. The common form of a gentleman’s suit at this time was a matching three piece, or matching coat and breeches with a contrasting, probably pale-coloured, waistcoat, as can be seem in contemporary portraits (see Pompeo Batoni’s portrait of Humphry Morice at Basildon Park, Berkshire, compared to those of John Simpson of Bradley Hall by Joshua Reynolds in a private collection and  Welbore Ellis, Baron Mendip, by Thomas Gainsborough, 1769, Christ Church Oxford ). Silks were woven specifically for use as men’s wear; small allover designs in one or more colours being characteristic of the middle decades of the 18th Century. Many surviving garments are made of cut or uncut velvet in warm shades such as this red. More informal and practical coats, like that in the Related Item, were of wool.

The coat and waistcoat show the beginnings of changes in style that were to become increasingly evident over the following decades. The front edges of both garments have started to curve backwards, forming an inverted V shape that would allow part of the breeches to be seen, and the waistcoat is noticeably shorter than the coat. The shoulder line is narrow and unemphasised, and the neck has a shallow stand collar that was a forerunner of the high collars of the 1780s and 1790s.

The two garments, together with other items of menswear of around the same date, were offered to the John Bright Collection as French theatrical costume. Their linings have been marked with identification numbers and symbols, and some also have the stamp of the Théâtre Impérial de l’Odéon. This Parisian theatre was inaugurated in 1782 by Marie Antoinette, and, undergoing a number of name changes, became the Théâtre Impérial from 1852 to 1870, during the Second Empire rule of Napoleon III, thus establishing the period of the acquisition of these clothes by the theatre’s wardrobe department. Many surviving 18th Century garments owe their existence to having been used as theatrical or fancy dress in the following century. The back of the waistcoat has been modified with a strap and buckle for adjustment.