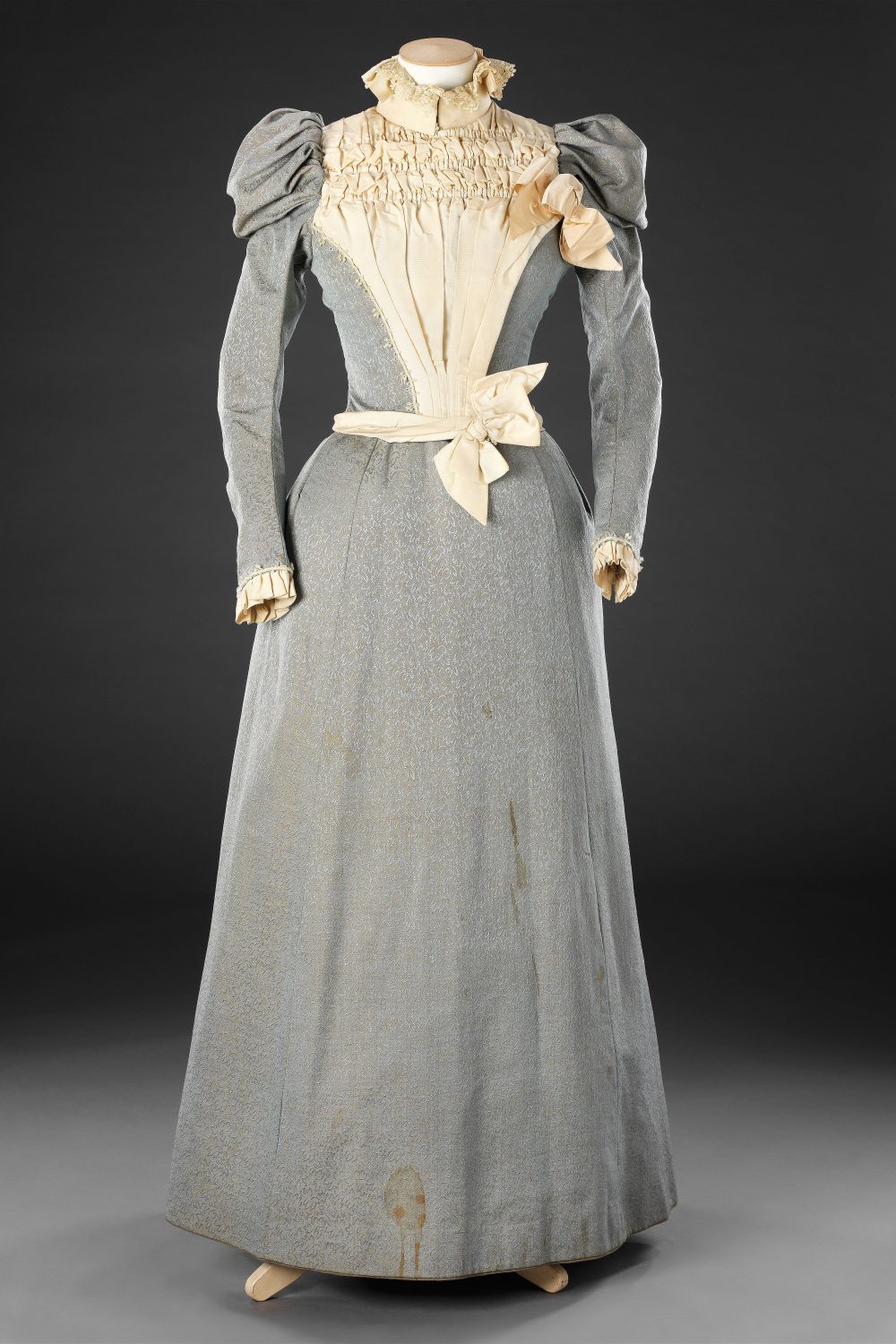 The historical value of a garment is strongly augmented by any visual or verbal information that accompanies it on its accession into a collection, enabling a provenance to be established and placing it within a social and geographical context.

One such example is this two-piece dress that was acquired together with a studio photograph of a young woman wearing it (see Additional Images). The dress was made, probably locally, in St Helens, Lancashire in the late 1890s, its fabric woven with a stylised foliage design in light grey-blue on a ground of light tan wool weft, and a grey-blue silk warp. Characteristic of its date are the asymmetrical front fastening, the bow trimmings, the fullness confined to the top of the sleeves, and the patterned cotton lining of the bodice.

By the end of the 19th Century the opportunity to have a studio portrait taken by one of the commercial photographers that had established themselves all over the country was open to all but the poorest. The photograph shows the sitter to be serious and slightly nervous of the experience. She has accessorised her dress with gloves (through which her wedding ring can just be made out), fairly stout shoes, and a straw hat trimmed with ribbon and an ostrich feather. A very similar hat that coincidentally was also bought in Lancashire at Farnworth, less than 20 miles from St. Helens, is illustrated in Related Items. The lace flounces that can be seen bordering the left front fastening and the collar have been cut away at a later date, although small pieces remain attached to the dress.

The image is large, measuring 10 inches wide by 12 inches deep (approximately 25.5 by 30.5 centimetres), and is mounted on contemporary card suggesting that it was originally glazed and framed to be hung on the wall. ‘Jordan and Metcalfe George Street St Helens’ has been stamped on the right bottom corner. This family-owned photographic studio traded on the same site from the mid 1880s to around 1970, and was run by James Jordan and his son-in-law Mark Metcalfe from 1897 to 1904. In 1984 over 3000 glass negatives were found sealed up in the back room of a pet shop on the same premises, and are now part of the St Helens’ Local History and Archives collection.