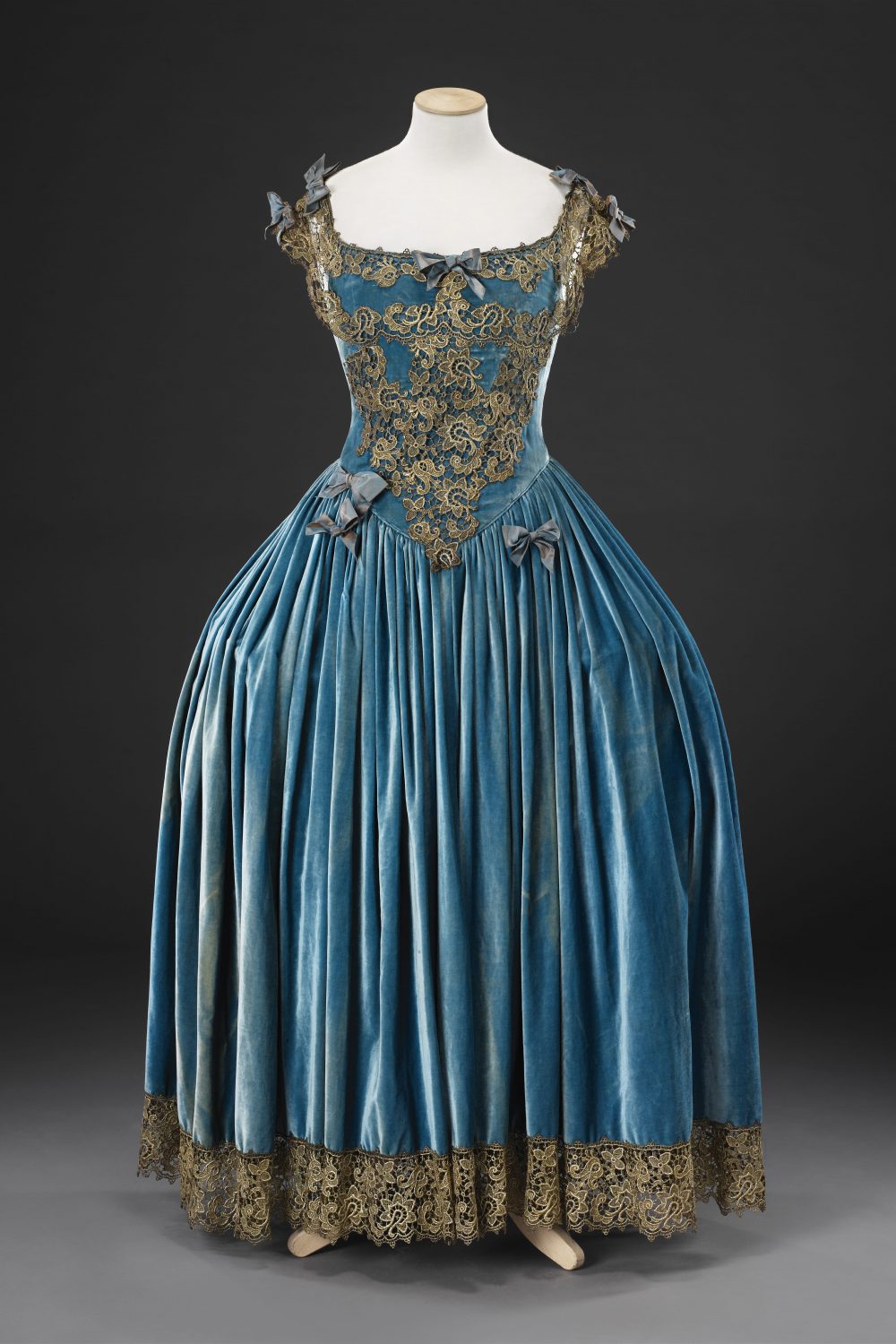 Velvet trimmed with silk and lace

Couturier to royalty and the British upper classes, Norman Hartnell is particularly renowned today for the magnificent gowns he designed for the present Queen’s wedding in 1947 and coronation in 1953. His interest in designing and making clothes was established in the early 1920s at Cambridge University where he acted and produced costumes for the Marlowe Dramatic Society and the Footlights revues. He opened his couture business in 1923, and although he concentrated on conventional fashionable clothing he maintained his association with theatrical and fancy dress costumes.

By the late 1920s Hartnell was designing dresses with full skirts and fitted bodices, some with internal hoops, for his younger clients. Although our dress fits into this category and is well made and hand finished, it lacks the finesse of a fashionable personal garment, and is likely to have been made for the professional stage where well-known actresses could expect to be dressed by the best. Constructed of silk velvet (one of Hartnell’s favourite fabrics) it is trimmed with coarse gold-coloured lace and small bows of silk shot in the blue of the velvet and gold of the lace. The bodice is lined in cream sateen. Beneath the unlined skirt a shorter sateen underskirt has a series of three semi-circular hoops on each side to produce the shape of ‘panniers’ or side hoops in a quasi 18thCentury style, each pair stabilised with tapes tied together across front and back. Judging by its various repairs, the dress was put to long service.

Picture No. 10920313 in the Mary Evans Picture Library (https://www.maryevans.com/)  from a 1923 issue of The Bystander shows Norman Hartnell as Gwendolyn Bentley in the Footlights production of the farce ‘Folly’ at the Strand Theatre, London. He wears a dress of his own design very similar in concept to this example, with a long narrow sleeveless bodice pointed at the centre front waist, and a full skirt supported by hoops based on contemporary ‘robes de style’ made fashionable by couturier Jeanne Lanvin.