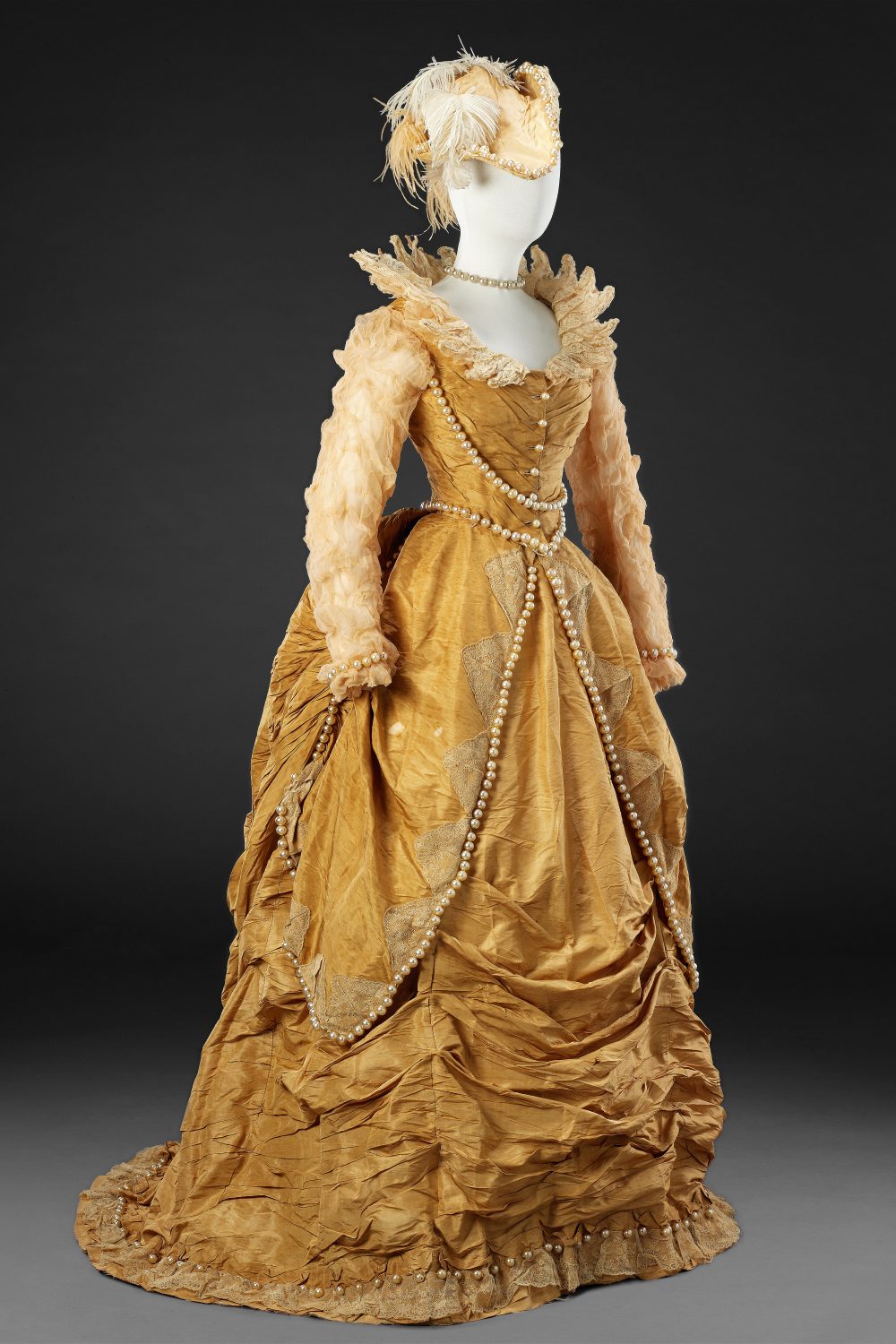 Silk taffeta and chiffon, trimmed with lace, synthetic pearls and feathers
Labels in both dress and hat: ‘By Special Appointment ʺ Dressmaker ʺ to HRH The Princess of Wales. Elise 170 Regent St. London’

Acquired from costume designer May Tapley

This outfit, consisting of a bodice, overskirt, underskirt and hat, came in to the John Bright Collection with two handwritten labels, ‘Dress made by Madame Elise for the portrait painted by the Honble Henry Graves of Emma J (?) Hargreaves in 1871’ and ‘Hat worn in portrait painted by Henry Graves of E. J (?) Hargreaves 1871’. A further label, attached to the bodice, identifies the hand as Hargreaves’ own, and scrawled across the bottom corner she writes, almost as an afterthought, but with foresight, ‘It might be kept as a curiosity intact’. Although nothing more is known of her, she has provided for posterity the information of why and when her outfit was commissioned, and by whom it was made. Her portraitist was the well-born Henry Graves who married into the Duke of Wellington’s family and made a career of painting ladies within his social circle. Surviving portraits of the Marchioness of Bristol of 1870 and the Countess of Enniskillen of 1873 give an idea of his style. In 1871, the year he painted Emma Hargreaves, Graves was commissioned to portray Queen Victoria and her daughter Princess Beatrice, a not altogether successful experience for either artist or sitter. (see https://www.rct.uk/collection/search#/3/collection/406881/princess-beatrice-1857-1944-later-princess-henry-of-battenburg )

Emma Hargreaves clearly moved in well-to-do aristocratic circles. Madame Elise, from whom she acquired her outfit, in 1871, was a fashionable court dressmaker, who like others in the trade frequently supplied her clientele with elaborate fancy dress. The same year, Elise made the Princess of Wales’ costume as Mary Queen of Scots for the Waverley Ball, held in Edinburgh to raise funds for the Scott Monument. The company had survived in a highly publicised scandal less than ten years earlier in 1863, prompted by a letter in The Times from one of their dressmakers exposing the long hours and harsh working conditions that had resulted in the death of her colleague Mary Ann Wakeley. Such was the outcry caused that it was discussed in both parliament and the national press, was mentioned by Karl Marx in Das Kapital and inspired The Ghost in the Looking Glass, an illustration published by Punch in July 1863.

An interesting aspect of Emma Hargreaves’ striking outfit is the extent to which it appears to have been based upon those worn by Thomas Gainsborough’s aristocratic sitters in large scale portraits of the 1770s, and in particular that of the Honourable Mrs Graham of 1777, acquired by the National Gallery of Scotland in 1859. Mrs Graham, in turn, had also chosen to be painted in an earlier style of dress, based upon Sir Peter Paul Rubens’ 1630s portrait of his wife Helena Fourment in her plumed hat tilted to one side, ‘Medici’ collar, loose translucent sleeves, festooned bodice, and looped up overskirt, all of which filtered down to Emma Hargreaves’ outfit over two hundred years later. Rubens’ portrait, then in a British Collection, caught the imagination of 18th Century artists and affluent women who adopted the Fourment style as masquerade dress, later incorporating elements into their fashionable attire. Both Emma Hargreaves and Mrs Graham succeeded in portraying themselves in a manner that looked back into the past but was also in tune with fashionable styles of their own day.