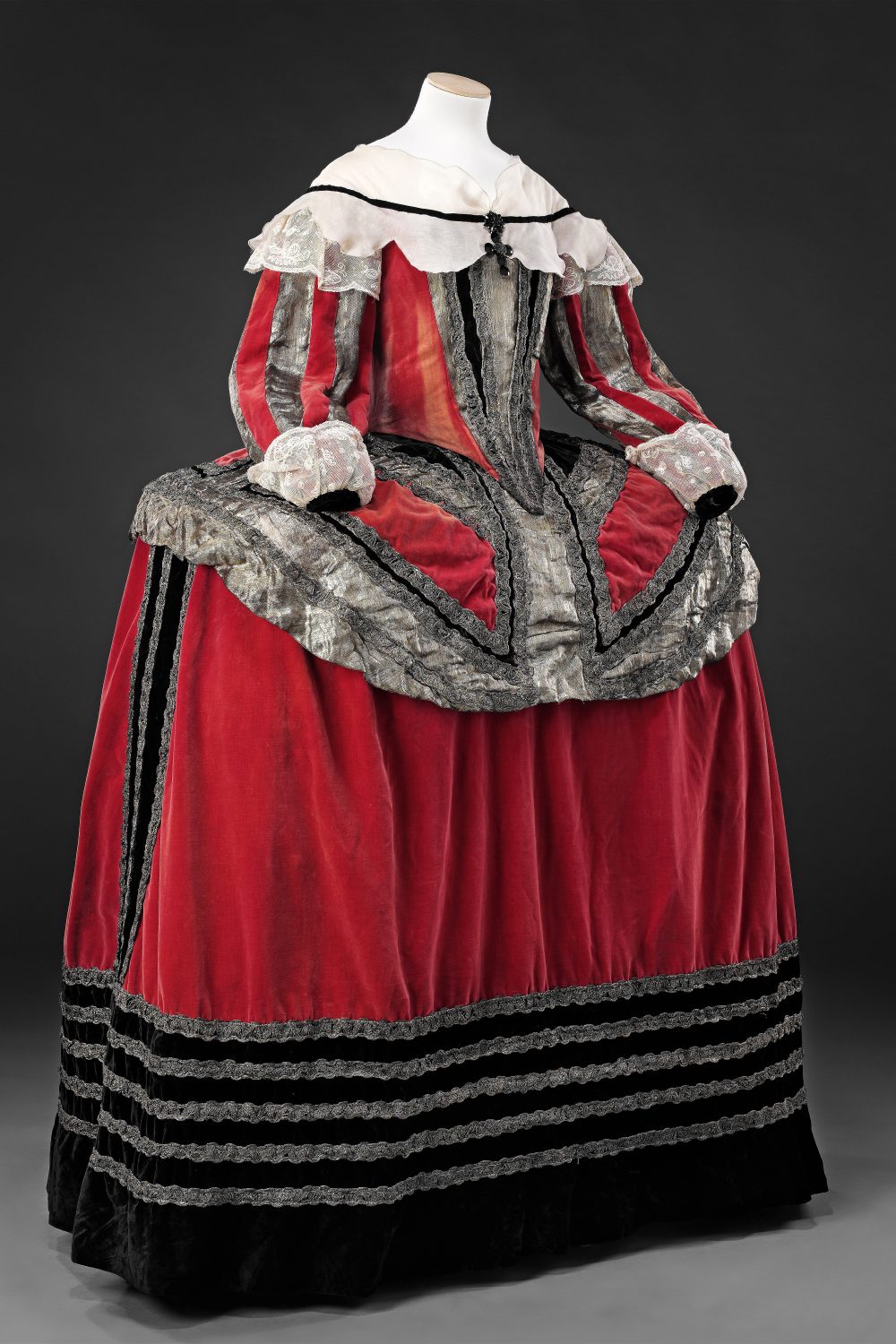 The cumbersome nature of this outfit points to its probable, relatively static, use for an occasion such as an historical tableau, a society costume ball or a theatrical production. It is evidently based upon the artist Velázquez’ portraits of female members of the Spanish royal family in the mid 17th Century, and in particular that of Philip IV’s wife, Queen Mariana of Austria, of 1652-1653, now in the Prado Museum, Madrid (scroll down or zoom out on their website for the full image). She wears the distinctive court dress of her country: a rigid bodice, a broad basque, and an immensely wide skirt supported by inner hoops. Although the width of the costume’s skirt has been lessened, no doubt for practical purposes, a reasonable attempt has been made to interpret these features. The rigid discomfort of Queen Mariana’s bodice is suggested by the convergence of bands of velvet, lamé and metallic braid into a deep pointed waist; the scalloped collar and the cuffs follow those of the portrait, while the sleeves are reinterpreted. The metallic bands that border the outfit are represented by braid and panels of lamé on the bodice and basque, and by braid around the broad black velvet hem of the skirt.

Little appears to be known about the costume’s maker Dunardé Ltd. It was probably a high quality dressmaking establishment in central Chicago where many palatial department stores were located. Dunardé advertised regularly in the Chicago Tribune during the 1920s for both staff in their workrooms and for potential customers, in both cases emphasising the quality of their workmanship and styling. No doubt they made fancy dress costumes for the elite of Chicago, such as the wealthy philanthropist Anita Mc Cormick Blaine, in whose archive can be found a 1923 bill for a Dunardé afternoon gown. A theatrical connection is evident in the local theatrical magazine The Drama in which full page photographs of actresses dressed by Dunardé appear in the mid 1920s, and in a January 1924 article describing the actress Elise Bartlett’s tour of shops, including Dunardé, to choose her outfits for a production called The Highwayman.