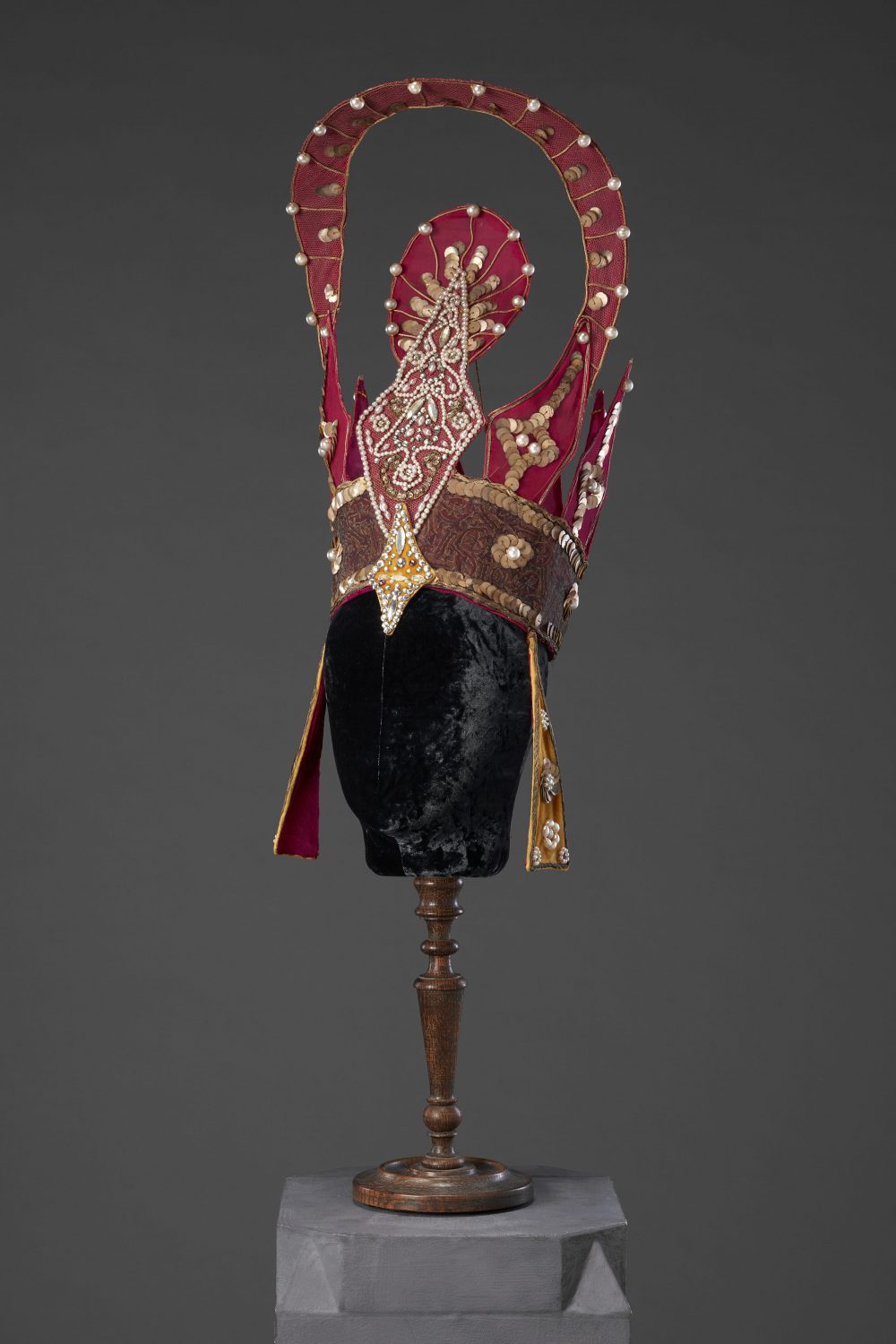 This impressive headdress was found in poor condition by John Bright in a Paris antique shop, and has since undergone conservation. It has no provenance, but appears to be based upon Leon Bakst’s design for Vaslav Nijinsky’s costume in the role of the Ballet Russes’ production ‘Le Dieu Bleu’ (see www.gettyimages.co.uk/detail/news-photo/le-dieu-bleu-ballet-costume-design-1911-costume-design-for-news-photo/463898733). The one act ballet was based on a Hindu legend set in India at the shrine of the Blue God. First danced in Paris in 1912, subsequent performances were not a success, and it was dropped from the repertoire after 1914. Nijinsky’s costume is now owned by the National Gallery of Australia. Its headdress is catalogued as made of ‘metallic gauze, braid and paillettes, silk embroidery thread, gelatin sequins, metal studs, metallic and other paint’. Its height is 50 cms, and it is attached to a skullcap. This version is much less elaborate than the original (see https://gallica.bnf.fr/ark:/12148/btv1b52504381m.r=nijinsky%20dieu?rk=21459;2), interpreting the design in a different, simplified form. The decoration on the crown section is represented by the patterned fabric, with an elongated triangle of yellow velvet hanging from it on each side. The upstanding pointed elements, fewer in number than the original, and the ‘halo’ are covered in bright pink gauze, upon which metallic sequins, faux pearls and narrow braid form simple patterns. The decorative focus falls upon the centre front where two diamond shaped panels are liberally embroidered with smaller sequins, ‘pearl’ beads and pastes of various colours. It may have been made by an admirer of Bakst for the theatre or fancy dress several years later. Bakst’s designs were not exclusive to the stage; he was known to have designed costumes for the eccentric hostess Luisa, Marchesa Casati to wear at her extravagant parties. A surviving photograph of one of these events shows her wearing a headdress that, like our example, is  a simplified version of that of the Blue God (scroll down to find an image of her wearing it here: https://www.christies.com/features/A-history-of-Peggy-Guggenheim-Venetian-palazzo-8304-1.aspx?sc_lang=en ) Part of her costume seems to be that designed for her by Bakst for her alleged appearance in a performance of ‘Le Dieu Bleu’ although the headdress is different in style.