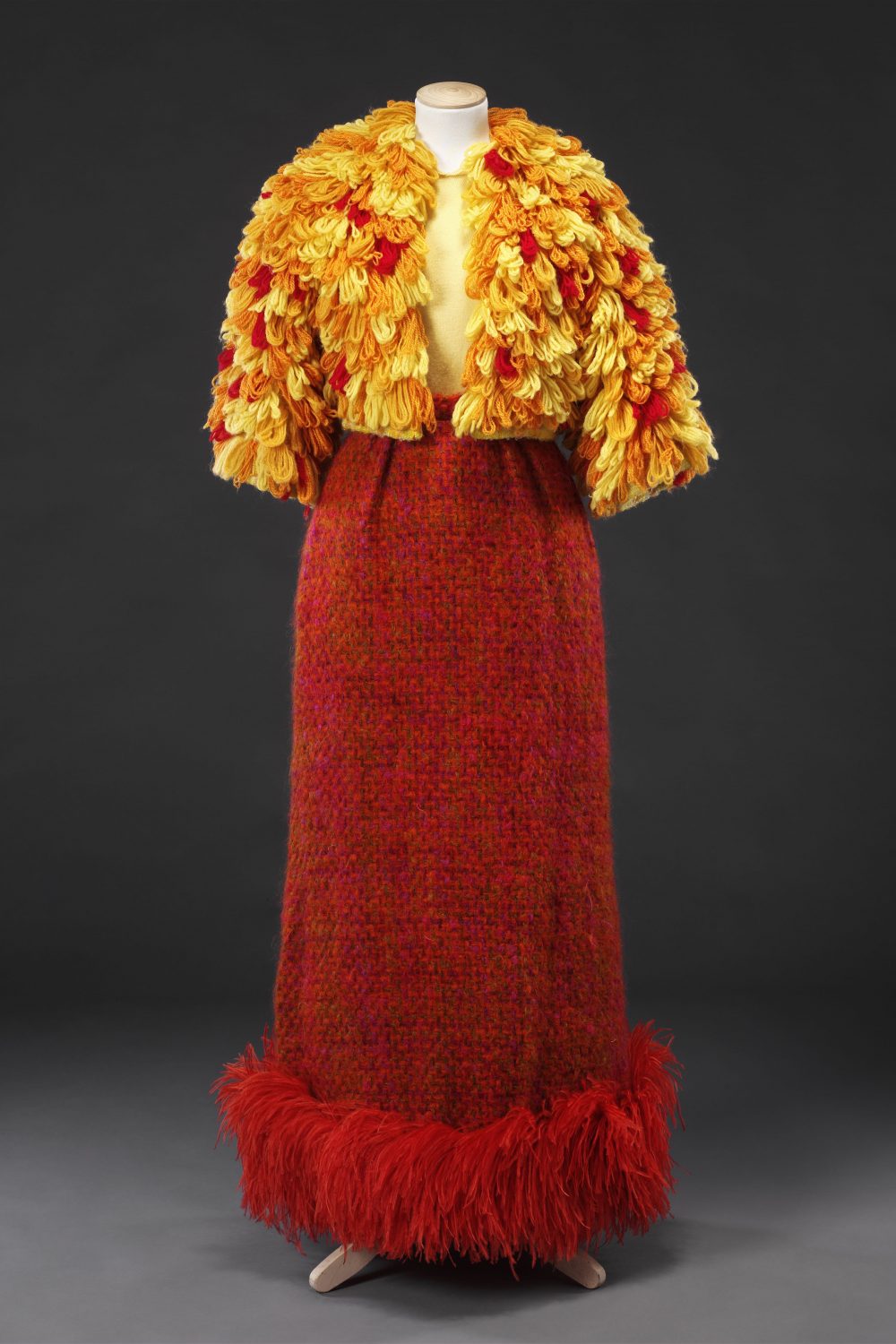 This striking outfit, probably designed as informal at home winter evening wear in the days before central heating became universal, consists of a full length skirt of vivid mohair tweed hemmed in ostrich feathers, and a short jacket of yellow tweed almost entirely covered in individually knotted yellow, orange and red wool loops. The skirt bears two labels, ‘By Graham Price Bond St. London’, its designer or retailer, and ‘Bernat Klein’ the eminent designer and producer of high quality woollen fabrics that were supplied to many well-known couture houses in the 1960s. Although not labelled as such, the base fabric of the jacket (see Additional Images) is likely to also be a Bernat Klein tweed, customised by the designer with its looped surface.

Born in 1922 into a family of Serbian textile merchants, Klein came to Britain after the war, studying textile technology in Leeds before setting up his own company at Galashiels in the Scottish Borders in 1952. Klein was a deeply cultured man with a wide interest in contemporary architecture, painting and crafts that informed his creative approach to the colours and textures of his wool tweeds. He admired the late 19th Century French artist Georges Seurat whose colour theory studies led to his development of pointillism, a method of painting in which colours were mixed not on the canvas but in the eye of the viewer. Like Seurat, Klein was fascinated by the effects of colour which he explored in his own paintings, developing his own system of colour guides and an innovative method of space-dying that introduced a number of carefully chosen shades into one length of yarn. Our skirt employs this technology in a number of hot colours – close up individual shades can be seen in the chunky weave like the dabs of paint in his paintings, but from a distance they meld together ‘setting the fabric ablaze’, in a phrase used by Klein’s daughter, with visceral intensity. Texture was also an important feature of his woollen fabrics, often inspired by the landscapes of the Border Country of the Serbia of his youth. The yellow tweed of the jacket is not only space dyed in pink, orange and white, but enlivened with bouclé and slubbed fibres.