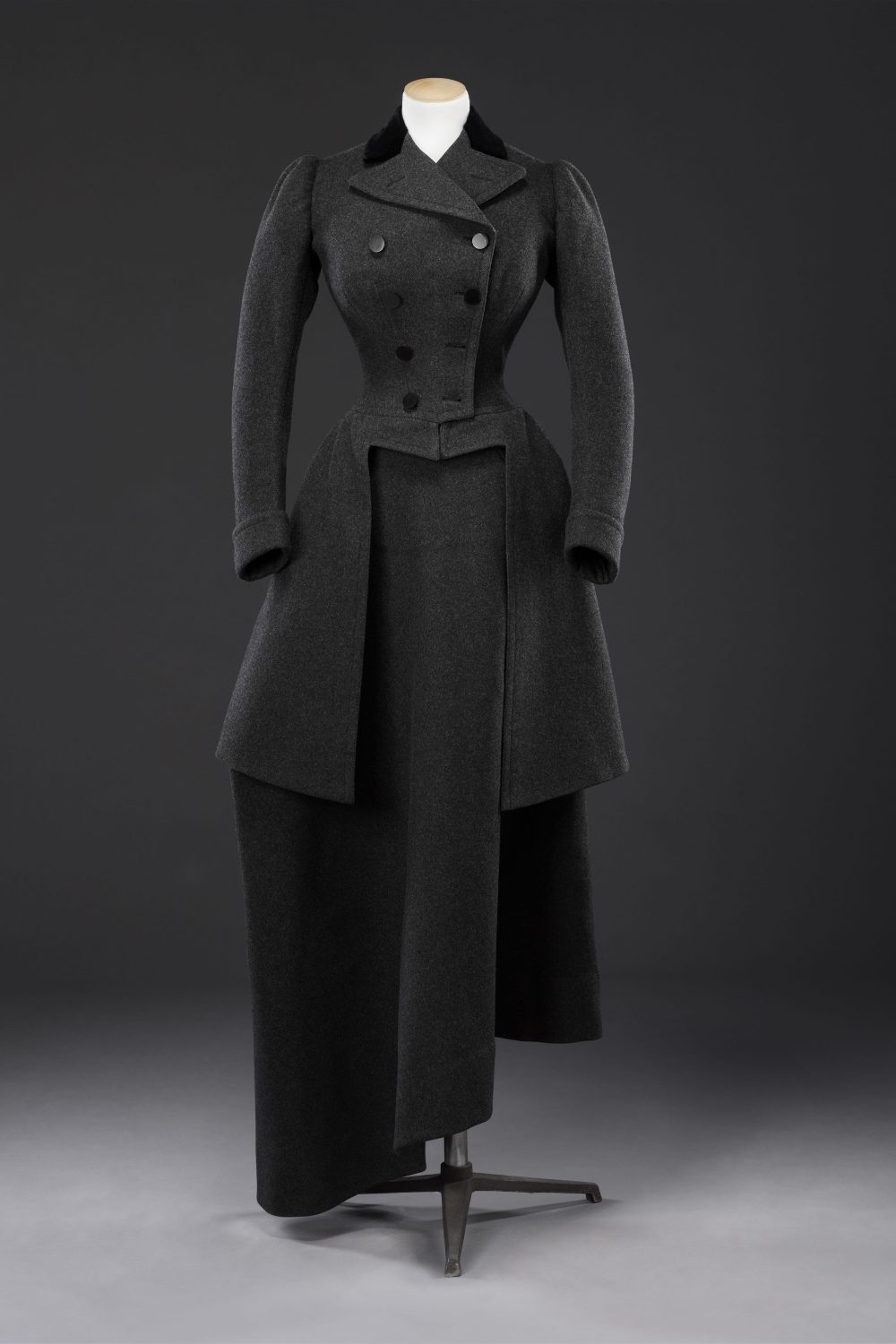 This elegant riding habit is a particularly fine example of its type and date, with little signs of wear. Not only has it been expertly tailored to give its wearer a flattering appearance on her horse, but it protected her physically with all the latest safety features. Of the highest quality in materials and workmanship, this would have been expensive to commission from her tailors, John Simmonds and Sons who were also historical and fancy dress costumiers and court dressmakers. In order to achieve a perfect result, the habit would have been fitted on the customer seated on a special trying-on block.

For many years women’s riding habits were influenced by men’s wear and made by tailors, but unlike men women rode side saddle with both legs positioned to the left side of their horse, the right leg supported at the knee by the pommel of the saddle. The potential dangers of the large area of the habit skirt getting caught up in an accident or fall became a subject of concern during the later decades of the 19th Century, addressed at great length in print by horsemen and women and the tailors whose practical challenge it became. All had different views, but their unified solution was the removal of much extraneous fabric to produce an asymmetrical skirt that incorporated special features to ensure the rider’s safety as far as possible.

The three components of this habit, jacket, skirt and breeches, can be seen in Additional Images. The jacket and skirt are made from extremely dense hardwearing charcoal grey wool that not only kept its shape well but repelled water and was easy to brush dirt and mud from; the breeches are of flexible wool jersey.

The main image shows the habit from the front. The curvaceous silhouette of the close-fitting jacket was dictated by a corset beneath, special corsets for riding and other sports becoming available at around this time. The jacket’s bodice has a crisp black velvet collar and the double-breasted buttoned fastening is further strengthened by hooks and eyes beneath. Its skirt is cut away to prevent excess fabric to the front of the rider and has a deeply overlapping back vent to ensure the breeches are not exposed. The asymmetrical shape of the safety skirt – ungainly when dismounted – is evident, and can be seen flat in Additional Images. It is cut away at the back to prevent entanglement in a fall, the front remaining for modesty, and is shaped to the right knee that is reinforced front and back with chamois leather. An internal strap ran under the right leg and the sides of the skirt folded around the legs fastening with buttons and tabs. The jersey breeches are cut very full in the seat, and across the back buttons fasten to corresponding buttonholes on the back panel of the skirt. All these features ensured that the garments remained well anchored to the body so that the rider could be reassured of her safety.