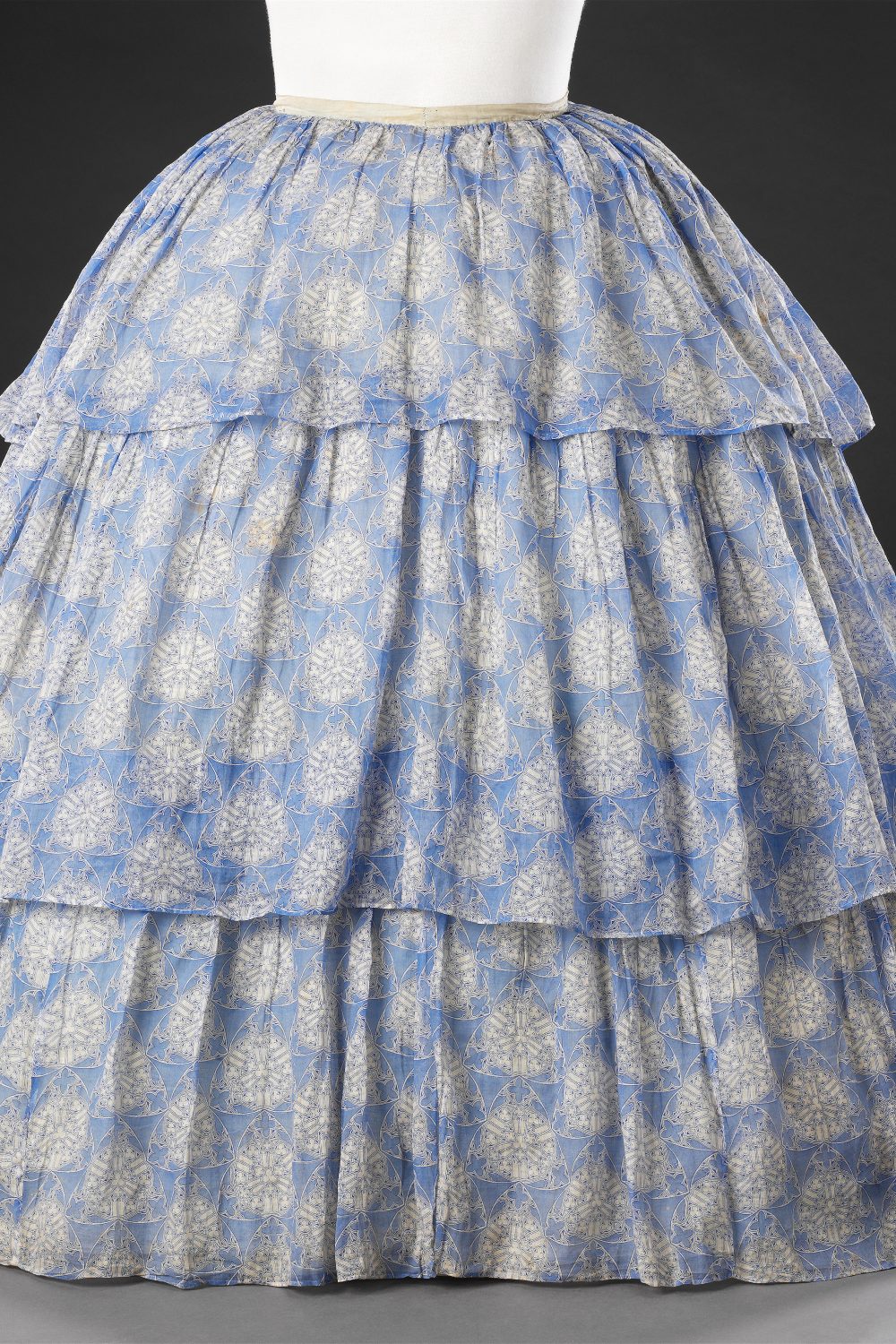 The predominant form of women’s dress throughout the latter half of the 19th Century comprised at least two pieces: a bodice and skirt, and sometimes an alternative day or evening bodice, a matching cape or an overskirt. The John Bright Collection is fortunate to own so many surviving examples in their entirety, but it also has a large number of single bodices that have lost their skirts to reuse – their relatively large areas of fabric being suitable to be made into smaller garments or children’s clothes.

This skirt is an example of the fewer skirts in the collection that have lost their bodices. Multi-tiered and immensely full, it would have been worn over a wide crinoline cage. Its fine cotton fabric was a product of the Lancashire cotton industry that dominated world trade at the time, and was printed by means of an engraved cylinder with a distinctive allover design of the tracery of a Gothic church window in two shades of blue. The design studios serving the Lancashire cotton industry looked widely for inspiration to the applied arts, making use of pattern books based on scholastic research into the art and architecture of distant eras and lands. By the time the fabric of our skirt was produced, the Gothic style of the Middle Ages had permeated not merely architecture but much of the design world, encouraged by practitioners such at A. W. N. Pugin.

The skirt’s Gothic window motif has been found to be identical to the tracery of the Lily Window in the southern transept of the Katharinenkirche (St. Catherine’s Church) in Oppenheim, Germany, an important Gothic church on the Rhine. From 1823 to 1829, the German artist Franz Hubert Müller produced an extensive study of this church, with coloured illustrations including the Lily Window, with the aim of providing inspiration for Gothic revivalism in the arts. (A copy can be found in the Royal Collection). It also acted as source material for the restoration of the church after it had fallen into a poor state of repair, in 1838-1843, by Ignaz Opfermann, who was elected an honorary member of the Royal Institute of British Architects in 1848. Perhaps an even more likely source of the Gothic window motif is Georg Moller’s Memorials of German-Gothic Architecture, a translated version being published in London in 1836. Moller wrote very highly of the Katharinenkirche, particularly its windows, and his text is accompanied by seven monochrome illustrations. The delicate engraved lines of that of the Lily Window’s tracery would have translated extremely successfully to those of the engraved cylinder used to print the fabric of the skirt.