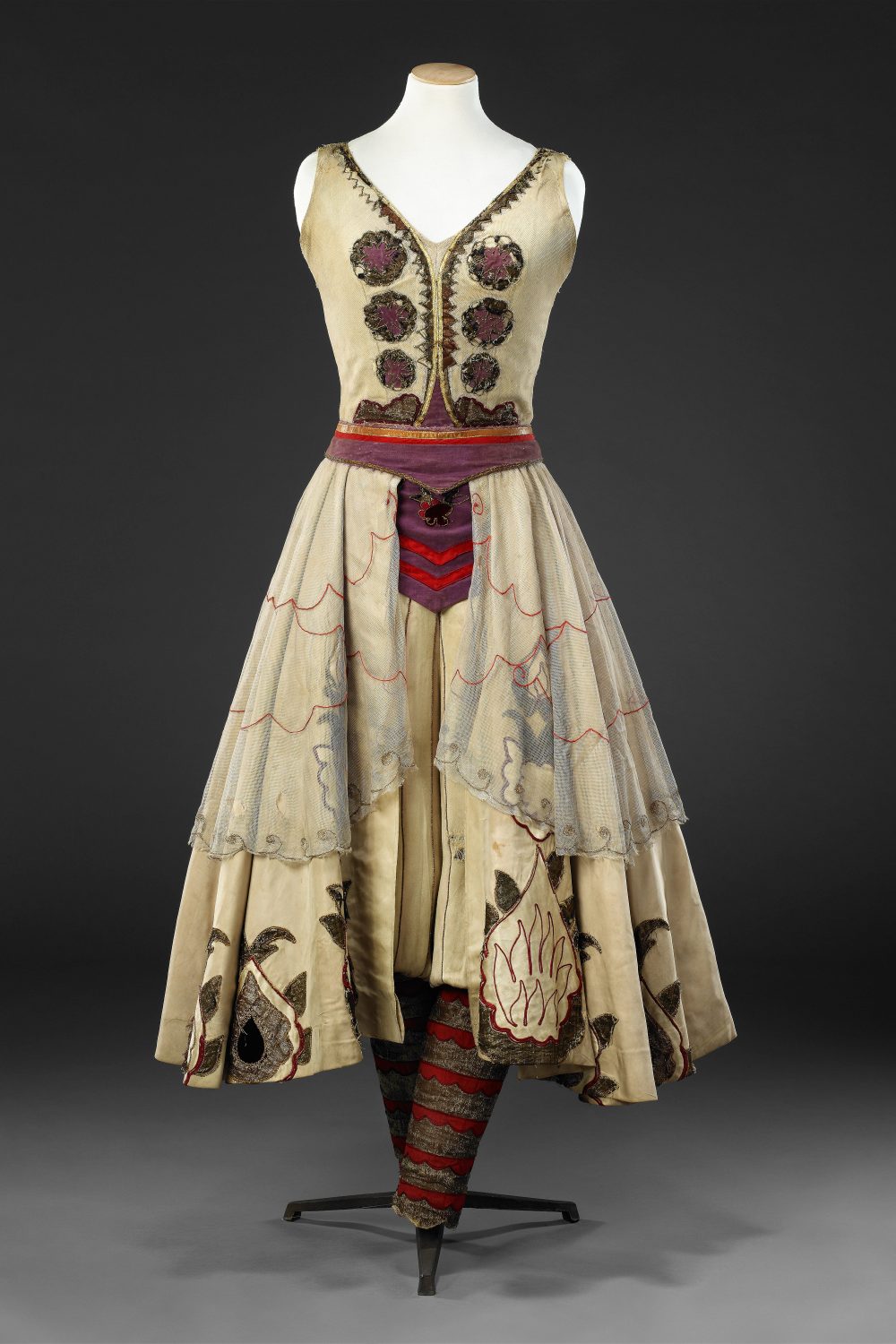 The John Bright collection owns a number of costumes worn by dancers in Serge Diaghilev’s Ballets Russes company and its subsequent incarnations, along with programmes and other memorabilia. These were acquired after the companies’ remaining costumes were dispersed through a series of sales held by the auctioneers Sotheby’s between 1968 and 1973.

This woman’s costume, for a young oriental dancer, is one of two in the collection that originated from the 1937 revival, at the Royal Opera House Covent Garden, of Diaghilev’s 1914 production of Le Coq d’Or, a reworking as an opera based on Alexander Pushkin’s poem The Tale of the Golden Cockerel. The avantgarde artist Natalia Goncharova designed vivid sets and costumes inspired by Russian folk art for this fable set in ancient Azerbaijan.

By 1937 Diaghilev had died, and the company had been renamed Colonel de Basil’s Ballets Russes after its new director. Le Coq d’Or was adapted once again, purely as a ballet, with Goncharova reworking her 1914 designs. The design for this costume is now in the Houghton Library, Harvard University (See http://id.lib.harvard.edu/images/olvwork172901/urn-3:FHCL.HOUGH:84503/catalog) and shows the headdress and other accessories that were worn with it. Goncharova and the Russian emigré costumier and maker, Barbara Karinska, were now able to take advantage of the artificial fabrics and metal zips that had become available in the interim and were more durable than the earlier silks and fastenings. In contrast to the costume from Le Coq d’Or also in the John Bright Collection that comprises four parts (see Related Item), this outfit is made in one piece and is missing its headdress. Its sleeveless fitted bodice of rayon taffeta is overlaid with silk net, and has a mauve velvet waistband and inner basque; attached to this are satin trousers, striped in gold cord, gathered in to red and gold zipped leggings. The full skirt, open down the centre front, and with a short net overskirt, is decorated with Goncharova’s characteristically bold appliquéd motifs. Its flame red taffeta lining would have been revealed to dramatic effect when dancing, as can be seen in a photograph of Sono Osato performing at the Theatre Royal Sydney during an Australian tour. A further Australian photograph shows both our costumes from Le Coq d’Or together on stage in a scene at the court of Queen Shemakhan. The two costumes are each marked with the name ‘Larkina’, a russianised version of Moscelyne Larkin who later became a principal dancer in the company and founded the Tulsa Ballet of Oklahoma. Her name also appears in a further costume from the ballet, now in the National Gallery of Australia, showing how versatile a young dancer had to be in undertaking a number of roles in the same production. 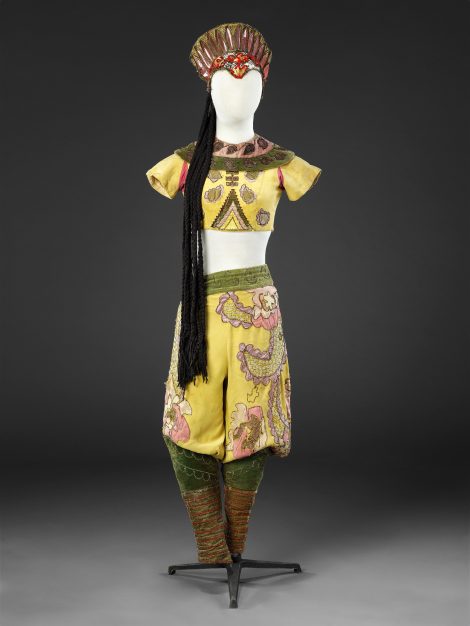