The underwear manufacturer, Kestos, was founded in London in 1925 by the Polish designer Rosamond Klin; it became celebrated for its lightweight bras with straps that crossed over at the back and fastened under the bust, making them both comfortable and easy to put on. (See Additional Images). The firm took its name, appropriately, from the Greek word for a girdle worn by the classical goddess Aphrodite to promote desire, as mentioned in Homer’s Illiad:

‘from her breasts [Aphrodite] unbound an elaborate kestos himas on which had been wrought all enchantments: love, desire, and the whispered endearments that steal away good sense, even from the thoughtful.’

Kestos, along with other underwear manufacturers such as Charnaux (see Related Items) took a sophisticated approach to advertising and display, employing eminent graphic artists and designers to produce a chic brand style. Ambiance was an important aspect of marketing and some of the fashionable London department stores were turning away from opulent Edwardian interiors to embrace glamorous Art Deco or sleek Modernist aesthetics; Austin Reed and Derry and Toms remodelled their interiors in Art Deco style, while Simpsons of Piccadilly and Peter Jones of Sloane Square both opened buildings in the International Modern style in 1936.

In just such a setting, this life-sized, but unnaturally elongated, promotional figure of Aphrodite may have disdainfully turned her head away from the shoppers beneath. Modelled in a fashionable contemporary style, she is an Art Deco version of an ancient Greek statue, her impassive face seen in profile with its long straight nose, stylised crimped hair and chunky pendant earrings. Her thighs are prominent with one knee placed slightly to the front on the other, and her truncated arms recall her most famous incarnation, the Venus de Milo in the Louvre, Paris, of 130-100 BC. The name Kestos is prominent on the Art Deco plinth.

Kestos’ competitor, the Charnaux Patent Corset Co. Ltd, commissioned the Charnaux Venus from Frank Dobson, one of the most esteemed sculptors of the day, in 1933. Venus was the Roman name for Aphrodite, and the two figures are very alike in concept. 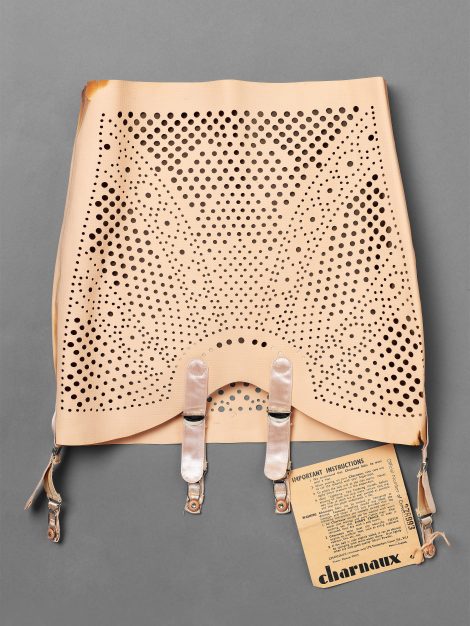